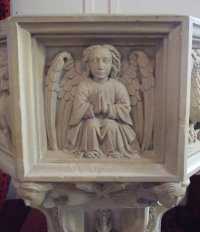 KNOCKNAREA: ST.ANNES
St. Anne’s Knocknarea, in the Diocese of Elphin, is a beautiful small church located in the ancient small parish of Killaspugbrone, over five miles west of Sligo on the road to Strandhill. It is situated close to the shoreline in a most
scenic area below Knocknarea, on the top of which, according to legend, is the burial place of Maeve, Queen of Connacht.

In the 1830s, Divine Services for members of the Church of Ireland living in the two small parishes in the area were held in private houses or in a small school somewhere close to the site of the present church. The proposal to
build a church in the parish was made initially in 1835 and six years later fund-raising commenced. The appeal in 1841 was made to ‘Protestants of the Empire’ to build a church at the foot of Knocknarea [Cnoc na Riadh – variously translated as ‘the hill of execution, of the moon and of the kings and the smooth hill].

The main reasons given for building a new church were that it would provide a place of worship for Church of Ireland families in the Strandhill area who lived at a considerable walking distance from the nearest parish churches at Sligo and Ballysodare and who were also reluctant to attend either church because of the contrast of ‘their rustic garb with that of the better clad citizens’ of those towns.

By 1843 the required endowment of £1250 had been raised, almost all of which came from the local gentry who eventually were made trustees of the church. With further fund-raising by trustees and a grant from the Ecclesiastical Commissioners, work on the building commenced and the foundation stone of the building was laid on 29 September 1843.  Almost two years later it was consecrated and dedicated to St. Anne, as shown on the
inscription above the porch door, IN HONOREM B. ANNE DEO O.M. DEDICATA ERE PRIVATORUM COLLATO EDIFICATA A.D. MDCCCXLIII.

There is no extant record explaining the choice of dedication although as the wives and mothers of two of the most generous benefactors were both named Anne this may have been influential. The church was designed by
John Benson, architect and engineer, of Sligo, who was later awarded a knighthood for his design of the buildings for the Irish Industrial Exhibition, Dublin, 1852.

The original small church was built in Gothic Revival style, with a three-bay nave, a lower and narrower structural chancel east of a chancel arch, a south facing porch and pointed openings. The nave was extended westwards by one bay in the mid 1860s with the architects, WeIland and Gillespie, adhering to the design of the original building. The walls, apart from the north face, are of limestone ashlar which most likely came from quarries near Ballysodare. On the north face there are no windows, as in many other churches of that period, and the wall is rendered. The south, east and west walls which were visible from the old road have attractive features, with buttresses, hood mouldings on openings and tracery, stone mullions and dressed stone surrounds on the windows.

The gable of the attractive porch on the south wall is pierced by a trefoil shaped decoration. A stepped bell gable, containing a small bell with the inscription ‘Sheridan, Dublin, 1843’, summounts the roof at the east end of the nave and there are small decorative features on the gable tops. The ridge tiles have a decorative motif and the roof has bands of patterned slates. Unfortunately the very attractive south face of the building is not seen as the improved road now runs to the north of the church exposing the rendered wall and a recently built kitchen extension to passing traffic.

Inside, the church is simple and mainly glazed with diamond panes of clear glass but it contains several most attractive fittings and features. There is stained glass in the three-light east window [1873] depicting Biblical scenes,
the lancet on the south wall of the sanctuary and the twin windows on thewest wall which contain the coat of arms and crest of one of founding families of the church. The altar, of ‘Neo-Elizabethan’ design [Williams], themarble and alabaster reredos, the ornately carved granite font, the carved oak pulpit, chairs and roof trusses, the wooden panelled ceiling, and the beautifully carved corbels with angels painted in blue and gold are, perhaps, the most decorative features. The pews bear names scratched by pupils of Primrose Grange School which was situated in and had strong links with the parish until it moved in 1906 to become Sligo Grammar School. 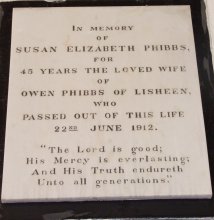 There are many memorials in the church most of which commemorate
members of the families of three original trustees whose interest and
constant generosity has done much to ensure the continuing redecoration
and repair of the fabric, to adorn the building and, in the nineteenth
century, to augment the stipend of the rector. 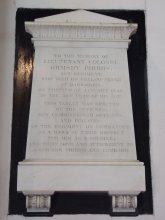 None of the descendents of those families now live in the parish but one maintains links and contributed very generously to the restoration of the church in the 1960s and gave a new organ in 1985. Many other families have also contributed over the years to the adornment and repair of the church.

There was a most painful dispute in the early 1920s when the bishop and the rector were taken to a consistorial court by a parishioner from one of those beneficent families for refusing him permission to lay the swords of his two sons, who had been killed in World War I, on their memorials. Permission was not granted on the theological grounds that there should be no sword in the sanctuary of a church and on the practical grounds that, in the disturbed state of the country at that time, they could be stolen and misused.

From 1681 until the disestablishment of the Church of Ireland in 1870, Killaspugbrone and Kilmacowen, the two small ancient parishes ‘On the Strandhill peninsula, were united to and were a perpetual curacy within Sligo Parish. That union of parishes was dissolved in 1871 and St. Anne’s became the parish church for the area but only for just over fifty years until 1923, when the parishes were united once again. Possible closure of St. Anne’s, threatened for a period of time due to lack of clergy during a lengthyinterregnum in the early 1980s, was thankfully avoided mainly due to the
efforts of a lay reader who faithfully conducted Morning Prayer each Sunday during that time.